An Election Poem – "Talk of the Town"

From Mike McCurry’s “Talk of the Town” column in The Clarendon Courier on April 16, 2015

Looking back on our town’s recent election,
I present this review (and some wry indiscretion).
There were candidates, a caucus, the park district too,
And poll-watchers who stuck to the judges like glue.
Candidates’ friends and families gave money and time,
While parents and children jammed in the yard signs.
There were too many signs at one business in town,
Which caused a big stink until they were torn down.
Thankfully, it worked out in a civil way,
With Starbucks coffee and level heads saving the day.
There were signs throughout town — some were red, white, and blue,
And one with a picture just like you-know-whos!
While some signs were allegedly stolen at night,
We’ll never really know; no one was caught on site.
There were “My” and “Voice of” and “Saving” and “C4,”
And those robocalls! (Stop! We can’t take anymore!)
Accusations about prostitutes; hacked email treasures;
And a store’s rumored name-changing to “Divine Pleasures.”
But the volunteer townspeople didn’t get alarmed;
They maintained our friendly village’s small-town charm.
The Hinsdale and Courier held candidate nights,
Giving even the veterans sweaty palms and frights.
They sure helped the public to forge an opinion;
While the blogs fought to maintain internet dominion.
The newspapers helped out in stirring the pot,
And political ads also thickened the plot!
There were days when the voting junk mail hit high gear,
And I laughed when that tall building pasted together did reappear,
“The town is going to the birds,” I’m sure it did say…
If I didn’t vote rightly, they would have their way.
There were three CH residents running for the school board:
An incumbent, a blogger, and a mother of four.
That last one sure seemed like a good bet to me;
She’s a smart former teacher, (and her name’s McCurry!)
Guess they ran out of reasons not to re-elect Marty;
Though they tried to evict him, he stayed at the party.
The high school candidates had the most signs on the streets;
There was no way this year that they would take defeat.
There was contentious battling to even the score,
But the voters spoke loudly. Their votes cried, “No More!”
The election is over. Enough is enough.
Let’s forget the campaigning and accomplish some stuff!
No more knocking on doors, no more emails or calling.
No more train station loitering, hand-shaking or groveling.
The votes are all counted. I’ve run out of rhymes.
Good luck to the candidates … this is your time!
Mike is a Clarendon Hills resident; husband; Indian prince; Indian Guide Dad;  a Coach; an “old” football player and a real estate broker.  Mike’s columns are usually crafted about the buzz in and around the area.  It sometimes has a spin on real estate or cultural information, highlights a new business or announces school happenings.  He might include a “get-to-know” about some of our interesting residents and even a little about history. Whatever it is, it is sure to be about the “Talk of the Town”.
#ClarendonHillsRocks
Below are some of the images (many are hilarious!) from the recent election that took place on April 7, 2015 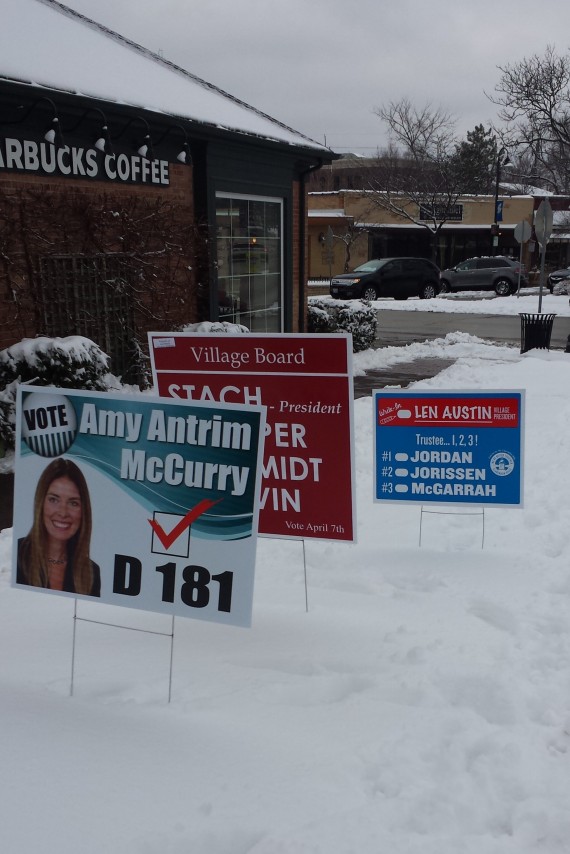 Many got taken down and the three remained

This was really sent out but it’s still hard to believe! Says: “champion of illegal aliens, prostitutes and convicted felons”. I guess you can say anything you want in an election! Wow!! 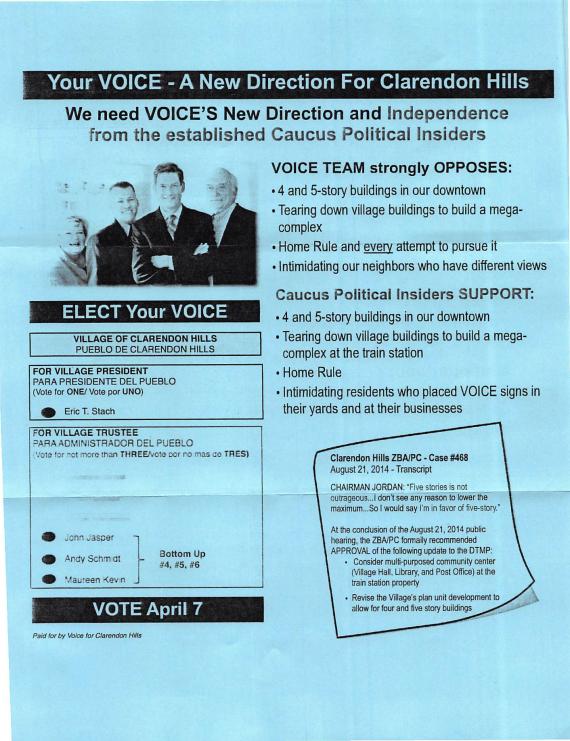 The C4CH sample ballot without the write in or D181

A column explaining why the “Hold D181 Accountable” Blog is good

“Though they tried to evict him, he stayed at the party.” Interesting that someone was called out as not being a team player but they made a sign without Marty’s name on it.